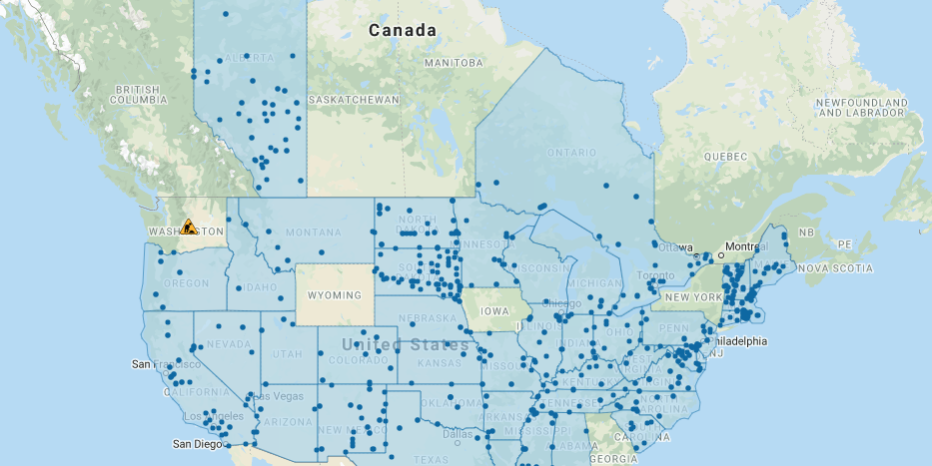 Geotab is offering users of their telematics solutions even more ways to save time and money thanks to Drivewyze PreClear – the only always-on bypass service available on the Geotab Marketplace, providing bypasses at temporary or mobile “pop-up” inspection sites, as well as at fixed weigh stations across the United States and in two Canadian provinces – Ontario and Alberta.

What does Drivewyze PreClear do?

Drivewyze PreClear saves fleets the time, fuel and on-duty driving time of unnecessary stops at over 800 weigh stations and inspection sites across 47 operational and in-progress states in the United States and provinces in Canada. The hands free, state distracted driving laws abiding and FMCSA compliant service provides drivers with “Heads Up” notifications, alerting them of upcoming weigh stations and inspection sites. The notifications help reduce accidental avoidance, and notifies drivers whether they qualify to Bypass the participating stop, whether to pull in for inspection at a Drivewyze site, or whether to follow road signs in place in the event of a non-participating site. Drivewyze PreClear Bypass rates can range from 50%-98% of the time and are largely based on your carrier’s safety score.

How does it work?

When approaching a participating Drivewyze site, drivers will receive a visual and audible notification from their mobile device two miles prior to the site and another notification both visually and audibly one mile prior to the site. The station’s Drivewyze participation will be indicated on the driver’s device screen with a blue banner with white writing stating “Drivewyze Site”. The driver will then receive a driving instruction either to Bypass or pull in. While Bypasses are granted 50%-98% of the time, the chances of getting a Bypass are largely determined by your carrier safety score and Bypass rates will vary from site to site and state-to-state depending on rules in place by state or provincial agencies.

As drivers approach stations that do not participate in the Drivewyze program, drivers will receive the same visual and audible notifications as participating sites two miles prior to the site and another notification one mile prior to the site. If a station is not a Drivewyze site it will be indicated on the driver’s mobile device screen with a white banner that states “Non Drivewyze Site” and drivers will be given the instruction to Follow Road Signs in place for that specific weigh station or inspection site.

Where are the Drivewyze PreClear participating weigh stations and inspection sites located?

There are 800 weigh stations and inspection sites across 47 operational and in-progress states in the United States and the provinces of Ontario and Alberta in Canada.

What other benefits does Drivewyze PreClear provide fleet owners?

In an industry that can sometimes find fleets struggling to recruit sufficient numbers of drivers for business and operational needs, Drivewyze PreClear can be the difference maker that helps drivers to sign with your business instead of the competition.

A 2016 survey conducted by Drivewyze which surveyed drivers on theirs needs and what drivers value most when choosing a job saw company-paid weigh station bypass in the top five only behind pay, time off (vacation/home time), core benefits (medical, retirement), and rider policy. The survey concluded that drivers were three times more likely to work for a company that provides weigh station bypass to its drivers.

The study also found that when routinely occurring delays like weigh station and inspection site delays are removed from a driver’s day, it can have a profound impact on driver stress levels.

What does Drivewyze PreClear cost?

As Drivewyze PreClear operates in both the United States and Canada, there are two prices according to the currency of each country.

There is also a free trial available so you can see how Drivewyze PreClear benefits your company before subscribing and there is also an option to subscribe to a USA + Canada bundle or subscribe to Ontario alone.

Do I need a special device for Drivewyze PreClear?

For more information on the Drivewyze PreClear service, visit their listing on the Geotab Marketplace here.

How You Can Optimize Your Operations With Fleet Benchmarking
February 1, 2023

How Small Fleet Can Best Use Telematics
December 13, 2022

How to Manage EV Range Anxiety The Right Way
November 29, 2022
Go to Top