Orkin Pest Control is a large company that handles over 5,500 trucks. It has over 8000 employees operating in more than 400 U.S. locations. 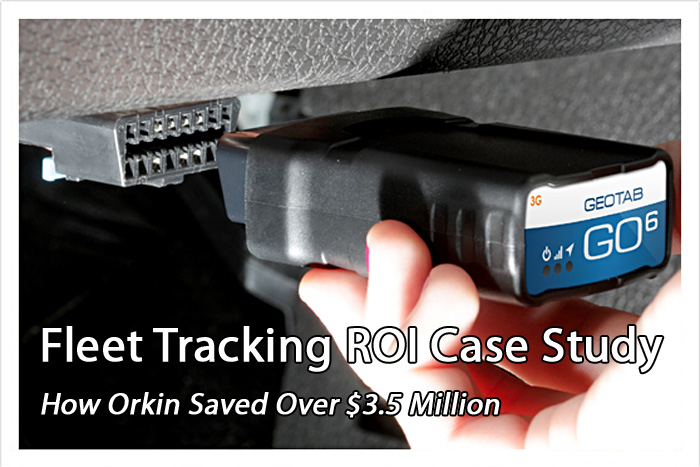 Orkin was searching for an efficient GPS solution that offers minimal maintenance, real-time accurate reporting and tamper-proof installation. The solution for Orkin was the Geotab GO GPS system. GPS to GO is an official Geotab reseller.

In 1999, Orkin began to invest over 4 million dollars to install GPS devices on all its vehicles. The cost may seem high, but through the years of using GPS fleet tracking, the ROI for Orkin is clear.  In addition to Orkin’s driver certification program, GPS monitoring and other company-wide initiatives, Orkin experienced a significant reduction in insurance claims.

Here is the ROI breakdown:

The GO GPS by Geotab system has helped Orkin in preventing serious injuries by encouraging employees to drive safely. Orkin has a rigorous driving policy in place. The following violations are grounds for immediate termination:

This may sound strict, but putting these regulations into practice, in addition to other company-wide driver education incentives, has significantly reduced costs for Orkin, as well as enhanced the safety of its employees and the general public.

While Orkin understands the “big-brother” fear expressed by some employees, the company states that the majority of its staff are comfortable with GPS. They understand that Orkin is their employer and that they’re expected to follow these rules.

Gibney states that “Our intention is to protect employees and the public from harm. I would say there aren’t a whole lot of companies out there right now that can say they cut their claims frequency by 60% and cut their claims dollars in excess of 40%. So the economics behind it make us a more vibrant and healthy company.”

A vehicle from Orkin’s Oklahoma branch was involved in an accident. Although the other vehicle had pulled out in front of his truck, the Orkin employee was charged with the accident, because the officers investigating the accident said he was speeding. According to their calculations, he was traveling in excess of 60 mph. Upon further inspection of the GPS system, it was evident that the recorded speed at the time of the accident was 48 mph. This information was taken to the police chief, who accepted the GPS record as being more accurate than the police officers’ calculations.

At another branch, a customer had a history of calling in to say she that the technician had not been to her house, even though a proper service ticket had been left at her home. In the past, the office had waived her fees, not wanting to lose her as a customer. After the GPS system was in place and the customer called to with the same claim, the branch manager pulled the GPS records and found that the technician had indeed been to her house, where he spent 31 minutes. When the customer was told about this, she admitted that the real reason she had disputed the service was because she was having financial problems and had hoped that Orkin would once again waive her fee. Orkin then worked out a payment plan with the customer.

What are the benefits for Orkin in using GPS for fleet management?

Quality Check – Management is able to see clear evidence that employees are performing their jobs responsibly, by driving safely, not rushing through a service request or skipping services altogether. The GPS tracks the amount of time each technician spends at a customer’s residence.

The benefits of using GPS for Orkin are obvious, but these benefits are not confined to just large businesses. Even small businesses enjoy the same benefits from safer driving and more efficient customer service!

Are you considering GPS tracking for your fleet? The Geotab system is the only end-to-end fleet tracking solution – from the installed-in-seconds tracking devices, to the sophisticated yet user-friendly fleet management software. Couple that with GPS to GO’s affordable pricing and no fixed or long-term contracts, and you’ll be saving money in no time.

Get rolling today with GPS to GO.

GPS to GO, now you know